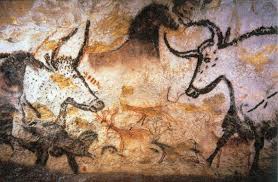 Some of the earliest of all known art (pre-historic cave and rock art) features wildlife. However, it might be more properly regarded as art about food, rather than art about wildlife as such.

Then for a lot of the rest of the history of art in the western world, art depicting wildlife was mostly absent, due to the fact that art during this period was mostly dominated by narrow perspectives on reality, such as religions. It is only more recently, as society, and the art it produces, frees itself from such narrow world-views, that wildlife art flourishes.

Wildlife is also a difficult subject for the artist, as it is difficult to find and even more difficult to find keeping still in a pose, long enough to even sketch, let alone paint. Recent advances such as photography have made this far easier, as well as being artforms in their own right. Wildlife art is thus now far easier to accomplish both accurately and aesthetically.

In art from outside the western world, wild animals and birds have been portrayed much more frequently throughout history.

Art about wild animals began as a depiction of vital food-sources, in pre-history. At the beginnings of history the western world seems to have shut itself off from the natural world for long periods, and this is reflected in the lack of wildlife art throughout most of art history. More recently, societies, and the art it produces, have become much more broad-minded. Wildlife has become something to marvel at as new areas of the world were explored for the first time, something to hunt for pleasure, to admire aesthetically, and to conserve. These interests are reflected in the wildlife art produced.

The History and development of Wildlife Art…

Animal and bird art appears in some of the earliest known examples of artistic creation, such as cave paintings and rock art

The earliest known cave paintings were made around 40,000 years ago, the Upper Paleolithic period. These art works might be more than decoration of living areas as they are often in caves which are difficult to access and don’t show any signs of human habitation. Wildlife was a significant part of the daily life of humans at this time, particularly in terms of hunting for food, and this is reflected in their art. Religious interpretation of the natural world is also assumed to be a significant factor in the depiction of animals and birds at this time.

Probably the most famous of all cave painting, in Lascaux (France), includes the image of a wild horse, which is one of the earliest known examples of wildlife art. Another example of wildlife cave painting is that of reindeer in the Spanish cave of Cueva de las Monedas, probably painted at around the time of the last ice-age. The oldest known cave paintings (maybe around 32,000 years old) are also found in France, at the Grotte Chauvet, and depict horses, rhinoceros, lions, buffalo, mammoth and humans, often hunting.

Wildlife painting is one of the commonest forms of cave art. Subjects are often of large wild animals, including bison, horses, aurochs, lions, bears and deer. The people of this time were probably relating to the natural world mostly in terms of their own survival, rather than separating themselves from it.

Cave paintings found in Africa often include animals. Cave paintings from America include animal species such as rabbit, puma, lynx, deer, wild goat and sheep, whale, turtle, tuna, sardine, octopus, eagle, and pelican, and is noted for its high quality and remarkable color. Rock paintings made by Australian Aborigines include so-called “X-ray” paintings which show the bones and organs of the animals they depict. Paintings on caves/rocks in Australia include local species of animals, fish and turtles.

Animal carvings were also made during the Upper Paleolithic period… which constitute the earliest examples of wildlife sculpture.

In Africa, bushman rock paintings, at around 8000 BC, clearly depict antelope and other animals.

The advent of the Bronze age in Europe, from the 3rd Millennium BC, led to a dedicated artisan class, due to the beginnings of specialization resulting from the surpluses available in these advancing societies. During the Iron age, mythical and natural animals were a common subject of artworks, often involving decoration of objects such as plates, knives and cups. Celtic influences affected the art and architecture of local Roman colonies, and outlasted them, surviving into the historic period.

History is considered to begin at the time writing is invented. The earliest examples of ancient art originate from Egypt and Mesopotamia.

The great art traditions have their origins in the art of one of the six great ancient “classical” civilizations: Ancient Egypt, Mesopotamia, Greece, Rome, India, or China. Each of these great civilizations developed their own unique style of art.

Animals were commonly depicted in Chinese art, including some examples from the 4th Century which depict stylized mythological creatures and thus are rather a departure from pure wildlife art. Ming dynasty Chinese art features pure wildlife art, including ducks, swans, sparrows, tigers, and other animals and birds, with increasing realism and detail.